It was cold outside, but it was warm in J’s place tonight.

Kylee Grimwood (twitter) opened us up for the night on her ukulele. After I asked her to open for me, I found out she had never done something like this before. You would have never known. 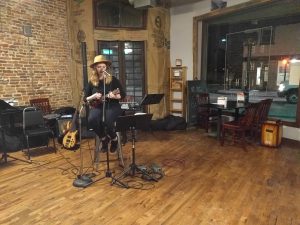 I had a great time tonight with (left to right) AJ on the bass, Tim on the keys and Ben on the cajon. I got to play all my favorite songs tonight, including my newest one, “Burn for You,” which is a song about revival sweeping this nation. I’ll give you the story on that song later on this year. In the meantime, enjoy part of a song that I wrote for Abbie a few years ago, called “More Than Words.” As a man, sometimes the words I want to say to my wife don’t quite do justice to the love I feel for her. I love you, Babe!